What We Already Know


Presented as cinematically luminescent lightboxes, What We Already Know depicted an unsettling and unsettled landscape. The shallow focus lending the spaces the appearance of a model, where scale becomes deeply deceptive, a strange doubling takes place; reflecting an uncanny quality in which familiar territories become unfamiliar, at once real and certain but also unclear and deeply troubling. The images are taken in areas on the fringes of cities; anonymous places which reflect a new breed of generic architecture, familiar across cities throughout the UK, places and sites so commonplace they almost function subliminally.

Each image presents an evocative mise-en-scène, drawing from the visual rhetoric of cinema, to motivate a play between reality and fiction. However, by withholding specific narratives, these images set a stage for disconcerting psychological dramas in which the viewer becomes implicated. Their artificial appearance signifies a ‘reconstruction’, yet suggests that they are to remain within a fictitious context. The images offer a sense of déjà vu; places or moments we have seen before but can’t quite recall. This imbues the illuminated pictures with an underlying sense of anxiety, which pertinently mirrors the climate of fear that bubbles beneath the surface of our media-driven culture today.


What We Already Know was published by Ffotogallery, Cardiff to accompany the exhibition in 2007. The book is available through Cornerhouse.

Richard Page
Richard Page is a photographic artist based in Cardiff. He received the Jerwood Photography Award in 2004 and his artist's monograph 'What We Already Know' was published by Ffotogallery in 2007. Employing a variety of approaches, his work considers how space is implicitly bound up with history, memory, and our psychological relationship with place. Richard has exhibited widely thoughout the UK and abroad, including shows in London, Cardiff and Germany. His work has been published in and/or reviewed in Portfolio magazine, the Guardian, Source, Art Review, Artists Newsletter and Royal Academy magazines. Richard is currently Senior Lecturer in Photography at Swansea Metropolitan University. 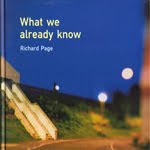